There are plethora of animals in the universe and each of them have different names, characteristic features and habits.

If you’re teaching your kid about the names of animals, you should segregate them according to the alphabet with which the names begin with as this helps them learn easily.

Animals That Start With the Letter B 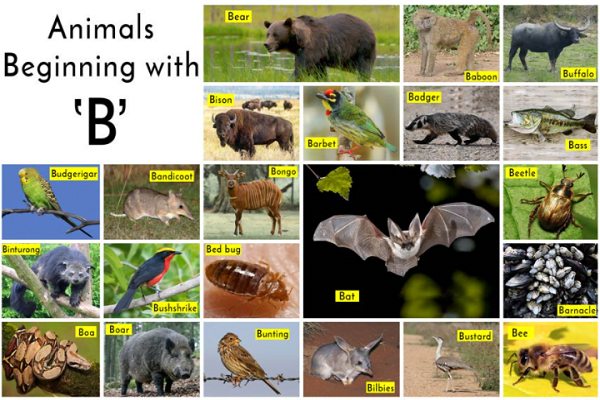 Now that you’re already familiar with the animals that start with A, here is a list of the amazing creatures whose names begin with ‘B’. We will not only provide you with a list of the names but also some interesting facts on each animal. Find out more about these animals.

Babirusas are creatures that belong to the pig family called ‘Suidae’. If you see the male babirusas, you’ll find them having larger tusks that are actually their canine teeth that outgrow their size.

These canine teeth grow amidst the flesh of their mouth and then protrude above the snout. There is one proposed and three recognized species of babirusa. These animals are usually found in Indonesia.

Don’t go by the name of this bird as it is not bald. The bald eagle, has a snow-feathered head that is white in color and a white tail. This Bald Eagle is considered as the proud national bird of the United States.

This is the only eagle that is said to be unique in North America. It has got a distinctive brown body, a white head and a white tail that makes it easy to be noticed from a far distance.

When this eagle flies, it rarely flaps its wings. It can soar high by holding its wings in a flat position. Its legs and feet and hooked beak are yellow in color.

This is a type of mammal which is both herbivores and omnivores. They can grow up to a size of 40cm long where its tail only measures around 17 cm. Some may grow up to the size of a rabbit.

Bandicoots are often confused with rodents and they are tiny marsupials that reside in almost every corner of Australia. Previously, you could find them at the backyards of homes but unfortunately, their number have been declining for several worthy reasons.

Barn Owl is a type of bird that is typically a carnivore with an average lifespan of 5 to 15 years. It has a body that measures around 46-63cm and a wingspan of 1-1.5m. It weighs around 2-5.5 lbs. It has got a typical heart shaped face and a buff back.

It has got pure white under parts and this makes it a typically distinctive countryside bird. The Barn Owl is one of the distributed birds that is found in most continents apart from Antarctica. Few places like Seychelles Islands and Hawaii Islands haven’t seen this bird.

Basilisk is a type of reptile that is omnivore and whose lifespan ranges till 10 years. The size of this animal is 2-2.5 feet including its long tail. The weight of this reptile is up to 7oz or 200g.

Did you have any idea that Basilisk lizards are great swimmers and they’re capable of staying underwater up to half an hour?

This lizard is found in Central and South American rainforests near streams and rivers. This reptile is also called the Jesus Lizard, Jesus Christ Lizard for its interesting skill to run on the surface of the water.

Bats are carnivore mammals which has got an average lifespan of 30-40 years. They are 29-33mm in length and weigh around 2g. Bats are special as they’re flying mammals with webbed forelimbs that develop into wings making them capable of flying.

As against other mammals like gliding possums or flying squirrels, bats fly for short distances. They don’t flat their wings like birds as those are their extended forelimbs.

Beavers are herbivore mammals with a lifespan of up to 24 years. They weigh around 60 lbs and their group name is ‘Colony’. The most interesting fact about beavers is that they are just second to humans as long as their ability to change themselves according to the surrounding environment is concerned.

When they find sites available, they burrow in the banks of lakes or rivers. They are also capable of transforming other not-so-suitable habitats by building dams. Thanks to their strong teeth that they can create massive log branches and turn them to dams.

Beluga Whale is a carnivore mammal with an average lifespan of 35-50 years. Their size is up to 20ft and weigh up to 3000 pounds. Their collective group name is ‘Pod’. Unlike most other whales, this beluga whale has got a flexible neck which lets it turn its head in different directions.

However, they are threatened species. Their calves are born gray or brown in color and they gradually fade to white once they become mature sexually at around 5 years of age.

Bisons are herbivore mammals with an average lifespan of 12-20 years. With a group name of ‘Herd’, they weigh around 930 to 2200 lbs. Their shaggy and thick coat is immensely well insulated, so much so that, snow can easily settle over its back without even melting.

The American bison is said t be the biggest terrestrial animal in North America. They are well known for living in the Great Plains. However, it is sad to note that the American Plains Bison isn’t listed as endangered.

Male and female Black Howler monkeys are folivore mammals that have an average lifespan of 15-20 years. Only the male Black Howler is totally black in color and the female is blonde in color.

These sexes also weigh differently in weight, males weigh around 6.7kg and females weigh around 4.5 kg. These monkeys also have a long prehensile tail and they grasp on to branches while they’re moving and feeding through the trees.

Therefore, if you’ve been wondering about the names of the animals starting with B, you should take into account the above-mentioned names. Keep in mind all the characteristic features of these animals as they usually differ from each other.