Are you looking for a long list of all the animals found on Earth? If yes, that would be a rather too long list to include in one article as there are numerous animals on planet Earth.

Parents often have to teach their children the names of animals found on this planet and this is when they look forward to a list of the names.

Animals That Start With E: List With Pictures And Facts 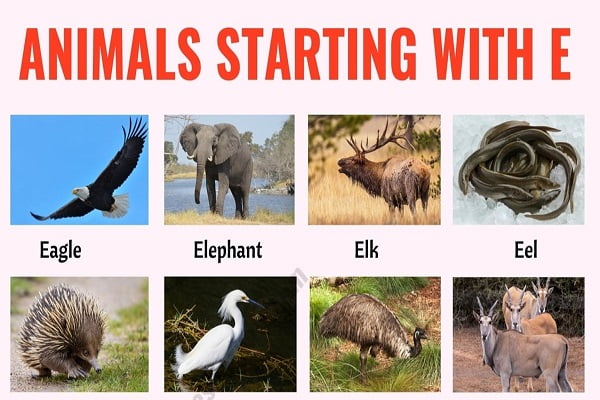 To make it easier for you, we have divided the names of animals with the letters they start with. To know the list of animals that start with ‘E’, keep reading.

This is a carnivore bird that has a lifespan of up to 28 years. The size of their body is around 34-43 in and their wingspan is 6-8ft. They weigh up to 6.5kg. Did you know that the largest nest of a bald eagle was around 3 metres wide and 20 feet high?

Yes, and that nest weighed more than 2 tons! Eagles are great at hunting prey as they have got stellar eyesight that is worth mentioning. However, it is sad to note that their conservation status is threatened.

Earthworms, as we all know, are invertebrates or animals that don’t have a backbone. The entire body of invertebrates is covered with bristles that anchor onto the earth and they push and contract their body to move forward through the soil.

As they don’t have lungs, they usually breathe through their skin. They don’t possess eyes but their skin has light-sensing cells attached. Earthworms are both female and male and there is no requirement for two parents to make offspring.

The Latin name of this animal is Pinnipedia and it is a carnivore mammal that has a lifespan of 40 years. They range in length from 4.5 feet but the Baikal seal can grow up to 20 feet. Adult seals weigh around 60 kg to more than 3600 kg depending on their species.

The colony is the group name of seals. Eared seals derive their names from the flappy ears that they have. Eared Seals can rotate their hind flippers up and down and hence they use all their flipper while on land.

The Latin name of this omnivore mammal is Scalopus aquaticus. They usually have an average lifespan of 3 years in the wilderness and a typical mole has rounded bodies that are about 15.3 cm long.

They weigh around 0.09 kg on average. It is well understood that they are extremely small animals that are seen rarely. Mostly, they stay active during dawn and dusk as it is tough to see them. They spend maximum time underground in their burrows.

Did you know that there are nearly 2000 species of earwig that you can find in almost all continents of Antarctica? These animals are characterized by their bodies that are flat but that extend into forceps from their abdomens?

These are pincers that are utilized in hunting, in defense, and for courtship. They usually live in corners but it is for sure that they don’t live in the ears of other animals.

Eastern Cougar is a carnivore mammal that has an average lifespan of about 12 years when they live in the wild. Adults grow up to 60-78 cm tall and the adult males are around 8ft long from nose to tail with a range between 1.5 and 2.75m.

These cats are native to the New World and they have common names like a mountain lion, puma, cougar, panther, and painter. All these names refer to the same cat species and their scientific name is Puma concolor.

The scientific name of Echidna is Tachyglossus Aculeatus and it is a carnivore mammal. Their length is 35cm to 52 cm and they weigh 4kg to 7kg and their top speed is 30km/h. Their lifespan is 15-40 years and they usually lead a solitary life.

Echidnas are spiny anteaters but both are not related to each other. Both echidnas and anteaters eat termites and ants. They are found in parts of Australia and New Guinea.

The scientific name of the Coral snake is Micrurus fulvius and they are also of questionable conservation status. This coral snake is a venomous snake that is found in the United States.

On the body of the coral snake, there are neurotoxins that hamper their nerve tissue. Thanks to the small size of the snake that they can’t emit as much venom as emitted by a larger snake.

Eel is a type of fish that is an omnivore that has a lifespan of around 5 years. The size of an eel ranges from 5 cm to 3.75m. Eels are usually found in freshwater and also in saltwater. They look like a snake and have long bodies.

However, unlike snakes, they don’t have scales on their body. More than 100 vertebrae are there on the spine of the eel and this makes this animal highly flexible.

The elephant is an herbivore mammal that has a lifespan of around 70 years. Their height (at the shoulder) is from 8.2ft to 13 ft and they weigh from 5000 to 14,000lbs. Their group name is herd and they are a threatened species.

Emperor Penguins are carnivore birds that have an average lifespan of 15-20 years. They weigh up to 88lbs and their group name is colony.

These penguins are found in colonies of thousands of birds on the Antarctica continent which is well-known for being covered with a sheet of ice that is a mile thick. The parents of these penguins are out looking for food and the chicks usually stay close together to keep themselves warm.

Therefore, if you’ve been looking forward to knowing the names of animals that begin with ‘E’, you have a long list to improve your knowledge. Keep in mind the details of the animals so that you can tell others about them.