There are animals present in every corner of the earth. Wherever you go, you’ll find some kind of animal, whether wild or pet animals. With the innumerable animals that are there on the globe, do you think it is possible to know and remember the names of all? Bet it isn’t!

However, there are parents who require teaching their kids the names of animals for their general knowledge. This is where we come in with our personalized list of animals divided as per the letters their names start with. Keep reading to know more about the animals starting with ‘O’. 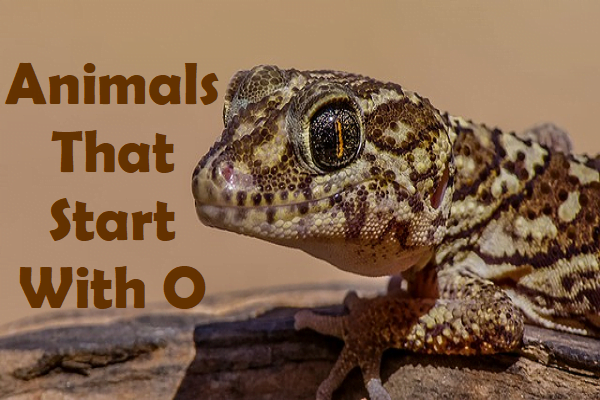 Another name for the ocelot is painted leopard and it is a medium-sized cat that lives in the wild, in the jungles of South America. It is also found in places as north as Texas in the United States and there are even bigger populations of ocelots in both Caribbean islands and Mexico. They lead a solitary lifestyle in the jungles.

Lifespan in the wild: 1 to 2 years

Octopuses are really intelligent animals. Did you know that the common octopuses have the capability of gathering crustacean shells and several other things to build fortresses or small gardens around the place where they reside? They are one of the fastest and largest among invertebrates and their body is round with eight long tentacles that have suckers on them. These suckers are given for getting a strong grip on the prey and to enhance their mobility. Their eyes are strong-sighted and they can spot food very fast.

In several places of the world, there are 60 different species of opossum and they are also called possums. One of the most noteworthy opossums is the Virginia opossum or common opossum. This type of animal is said to be the only pouched mammal that you find in Canada and the United States.

Orangutans are mainly tree animals and their feet have the capability of holding on to branches and making movements through treetops. Both female and male orangutans are brownish-red in color and this is supposed to be the most common color of the entire ape world. Males grow distinct cheek pads which grow with the age of the animal. They have a reddish-colored beard that comes out from their chin and hair and from their arms in the form of a cape.

Did you know that the young make orioles don’t get their adult plumage till the autumn of their second year? The Baltimore oriole is said to be the official state bird of Maryland and this is a famous animal that has been the namesake of the professional baseball team of the state. The Baltimore Orioles is the name of the state’s basketball team and they are the main bird since the late 19th century.

Size: 47 inches at the shoulder

Kenya’s Tana river divides the wide range of the two types of East Africa’s oryx – the beisa oryx and the fringe-eared oryx. This fringe-eared oryx ranges from central Tanzania to Kenya. The beisa oryx usually ranges from Ethiopia via Somalia into Kenya and north-eastern Uganda. The oryx is a huge antelope with a spear-like horn, and it is considered to be a true desert animal. It has a horse-like neck, short mane, and a muscular body.

Did you know that the osprey is definitely one of the most widespread flying predators that is found in almost every continent apart from Antarctica? Ospreys are at times confused with bald eagles but they can be recognized with their underbody which is white in color. Their white heads also have distinct black stripes that go down to the side of their faces. They have a similar habitat as eagles and they often fight for food. Fishes are their favorite food.

The ostrich is said to be the largest bird in the world. Ostrich is a flightless bird that is entirely dependent on its strong legs and two clawed toes that are used for kicking and running. Males are white and black with tail feathers and while females are grayish-brown in color. With their long skinny and massive body, small wings, and tiny heads, they look a little bit out of proportion. The ostrich can’t fly but it can run and travel up to 45 kmph for around 30 minutes.

Owls usually have thick and short bodies, with sturdily hooked beaks and powerful feet with sharp talons or claws. The majority of the owls are seen to have feathers on their toes and legs. These feathers are useful for protecting them from the chill during winters. Then they also have tufts of feathers that are stuck to the ears on an owl’s face. However, these are not ears! The ear openings lie on the side of the head and the feathers around the eyes are like an antenna.